Using the power of javascript code in your application.

Javascript is a very simple, but powerful programming language.  It's incredibly popular and there are tons of amazing resources on the Internet to help you learn how to use it.   Here, we are going to give you a quick introduction to the JS Code tool and show you a few things you can do with it.

How to use the JS Code Tool

To use javascript in your voice application, you can use the JS Code tool. This tool is located on the Data tab of each of your intents.   Remember, blocks in Voice Apps execute from left to right across the tabs and top to bottom within the tabs.  You can add multiple JS Code blocks if you need to. 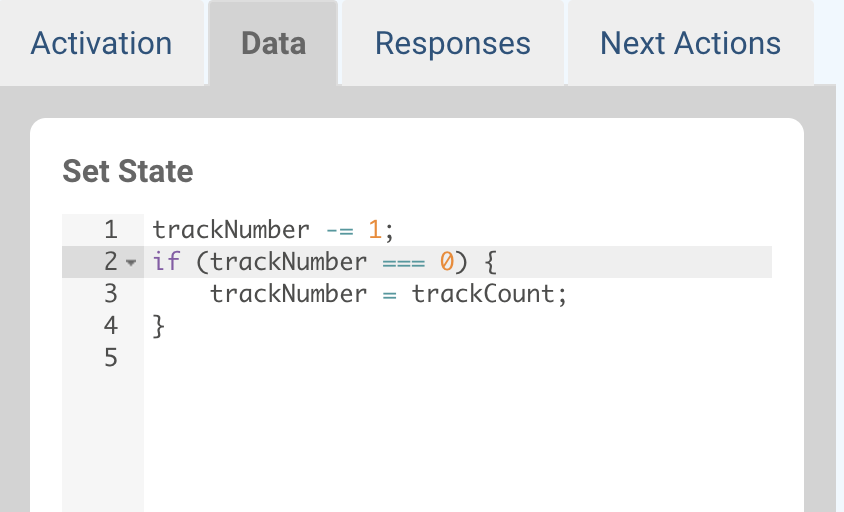 Don't worry if the code in the above image seems a little scary at first, it's really simple and we'll teach you everything you need to know in a few short minutes.

For those programmers out there, you may recognize that code as javascript.  For everyone else...that's javascript.  Javascript is an easy-to-use language that we allow you to use to store and manipulate data in your skill.  For advanced users, you can do some really complex logic using this tool, but let's learn the basics first.

NOTE:  This is just a quick introduction to javascript.  To learn even more, just search for "learn javascript" in your favorite search engine.

A variable is simply a place to store some information that we want to use later.  We can use variables to store things like the player's name, their score, which question we are on, or the results of calculations.

The most common thing you'll do with the Set State tool is create a variable and set it to some value.  You can do something this like:

The "let" keyword tells the system to create a new variable.  The name of the variable is "playerScore" and we've set it to an initial value of 0 .   Easy enough.

Here are the rules for naming variables:

We recommend the following naming conventions:

Assign a New Value to a Variable

If we want to update that variable later, we just write:

This would update the existing variable named "playerScore" with a value of 10 .

We can add, subtract, multiply, and divide variables:

Just like in high school algebra, we can use parenthesis to force a different order of the operations:

You can use the following operators in your calculations:

Add or Subtract a value to or from a Variable

We can also add or subtract values to or from a variable.  To add 10 to the playerScore variable, we would write:

We can also use a shorthand version and write it like:

Similarly, to subtract 2 from the playerScore variable, we would write:

We could also write:

Assign Variables to other Variables

You don't have to use fixed values like 10 or 2 , you can also assign the value of other variables to a variable:

Variables can also be set to text values instead of numeric values.  To do this, we surround the text we want to assign to the variable with quotation marks.

Sometimes you want to set a variable to a value, but only if another variable has a certain value or meets a certain condition.  To do this, we use an if statement:

Here we are setting the variable greeting to "Good Day" but only if the hour variable is less than 18 .

In addition to the < comparison operator above, you can use the following operators:

We can perform comparisons against multiple variables by using logical operators.  This comparison uses the && operator which means "AND":

So, this says "if the level variable is greater than 1 and the isPremiumMember variable equals false, then set the message variable to the text value".

Likewise, we can use the || operator to represent "OR":

This says "if the color variable is either "red", "white", or "blue", then assign true to the variable isUSFlagColor .

This has been a brief introduction to the javascript that you can use in the JS Code feature of Voice Apps.  There are many resources on the internet that will show you even more examples of what's possible.  Feel free to reach out to us if you have any questions!